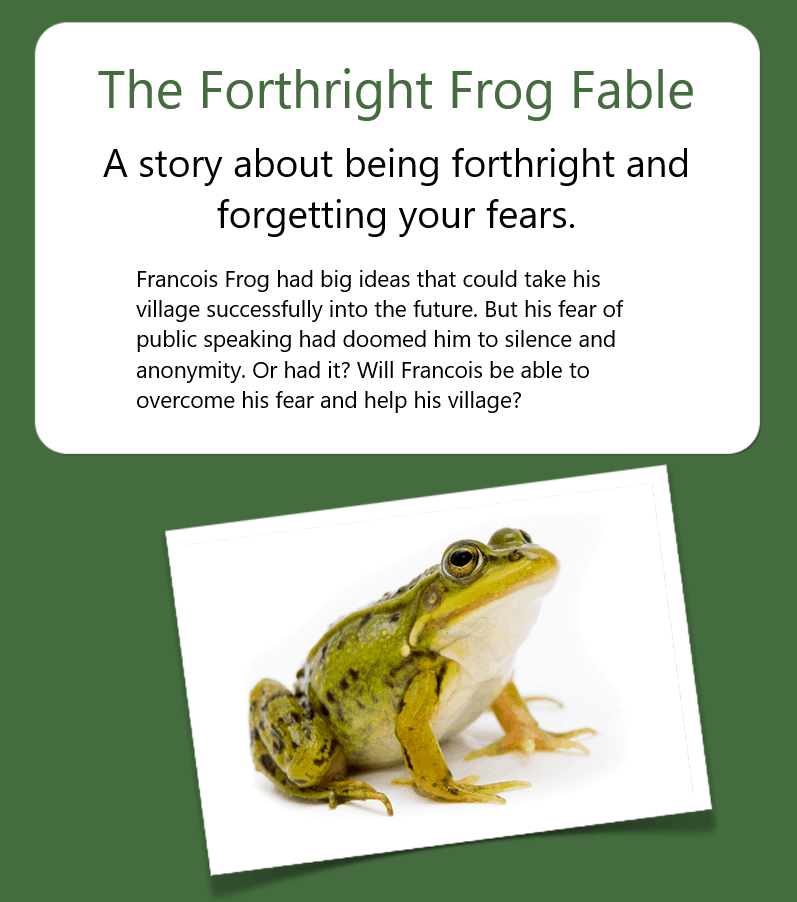 Francois knew that he was the best person to take charge of Frogville. The village was growing rapidly! Villagers discussed the need for a mayor, and started throwing names in a hat.

But nobody threw Francois’ name in because they hadn’t heard him speak. And that was the one thing that prevented Francois from nominating himself as a candidate. He was extremely afraid of speaking in public.

“I wish I had the confidence to speak up and be heard,” lamented Francois to his wife. “I have so many ideas for the village that I want to share with others.”

“Well, dear,” she said, “opportunities don’t come every day. And if this one really means a lot to you, you ought to put aside your fears and speak up!”

Francois gave some thought to his wife’s advice, and decided to give it a shot. He didn’t know if he would be voted in, but it was certainly worth a try.

The following day, Francois went into town and hopped up onto the Center Lily. He closed his eyes tightly and said to himself, “It’s now or never, Francois. It’s time to let your voice be heard.”

And with that, he gave a phenomenal nomination speech. Although they were shocked to hear Francois speak, all the villagers

cheered with excitement. They were very impressed with his plans for the village.

Villagers who hadn’t already voted started to cast their ballots for Francois. He was a little behind other nominees on the campaign trail, so he was nervous he might not come out on top.

On Election Day, the ballots were counted and Francois was announced as the winner. He happily hugged his wife and said, “I won’t let fear prevent me from speaking up and going after my dreams ever again!”

Moral: Avoid letting fear get in the way of your success.

Francois believed in himself. He knew what he was good at, but wasn’t outspoken enough to let his strengths be known. He spent much of his life allowing fear to prevent him from going after his goals.

You have likely been confronted by similar situations before. There’s so much out there you know you’re capable of attaining. But for some reason, your fears get in the way.

Opportunities that come your way may not stay around forever, so avoid holding back. When a great opportunity catches your attention, it’s because you know you can persevere.

Fear is the biggest deterrent to success. If you want to make the most of your life, fear has to be eliminated. Look your fears straight in the eye, and commit to stepping boldly past them.

The day you decide to speak up and be heard is the day that your life changes forever. There’s nothing more fulfilling than achieving something important in the midst of fear.

Figure out what kind of person you want to become. Come to terms with the fact that absolutely nothing stands in the way of you and your goals. Fear is an insignificant obstacle, which deserves zero attention.