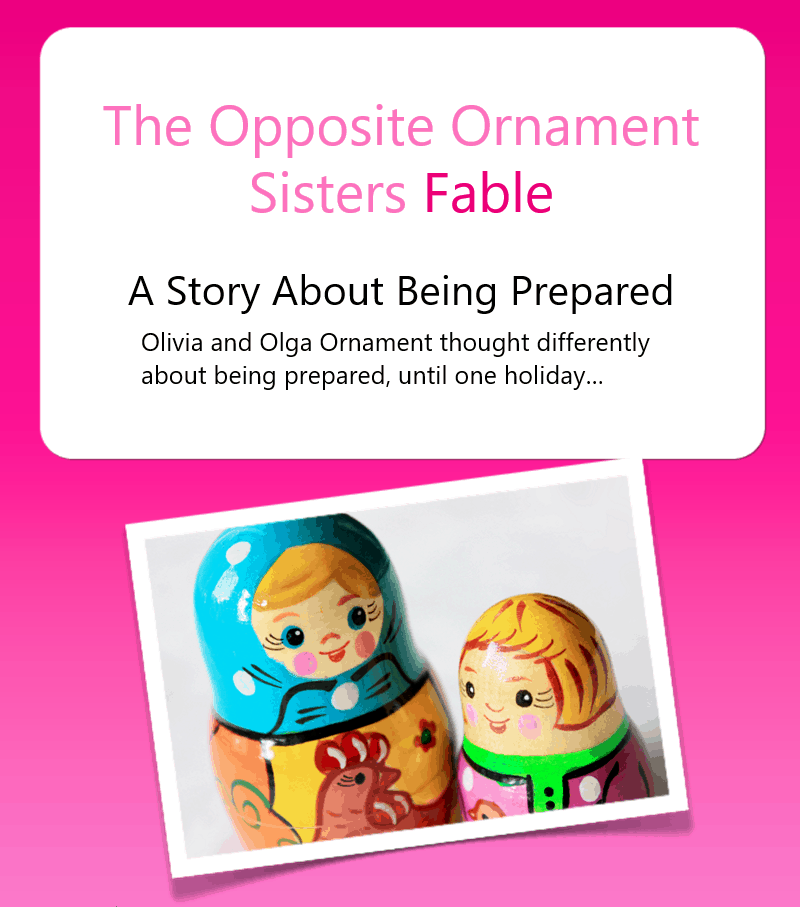 The Opposite Ornament Sisters

Twin sisters Olivia and Olga Ornament couldn’t be more different! Only friends and family knew they were twin ornaments. Others didn’t have a clue because of how different they looked and behaved.

At the end of every holiday, the Merry family would pack them away with all the other decorations. Olivia would ensure she was stored in a cushioned section of the ornaments box so she would retain her brilliance for the next holiday.

Olga, on the other hand, was a free spirit who never gave much thought to planning for the future. “It’s all about the here and now for me,” remarked Olga as she rolled around playfully with the lights and tinsel. “A little fun never hurt anybody!”

Every day, as Olivia sat still and socialised with nearby ornaments, Olga romped around nonchalantly. She rolled, bounced, and got entangled with the other decorations. In no time, she was tarnished, scratched, and dented.

“Oh my!” she exclaimed. “I’m not looking as beautiful as I used to. Maybe it’s time to take a break because the holidays are just around the corner!”

But Olga was a tad too late. Hanging around with her sister at the last minute didn’t undo the damage that was already done.

When Mindy Merry opened the box of decorations, she said, “Mum, look! This ornament is so old and tarnished. It looks like it rolled around all year.” Mrs. Merry replied, “You’re right, Mindy. Let’s just leave that one in the box.”

When Olga realised that Olivia was used as decoration while she was left behind, she immediately became sad. “If only I had stayed put like Olivia, I would have been chosen as a decoration for this holiday for sure.”

Olivia and Olga Ornament never had much in common. Of course, they were twin sisters, but their similarities stopped there. Olivia always thought about the future and planned

accordingly. Olga, on the other hand, never put much thought into preparing for anything.

If you think back, you’ll probably identify a time when you were just as eligible for a great opportunity as a co-worker or fellow student. However, because you neglected to put in enough work beforehand, you lost out on the opportunity.

You can never be too prepared for anything. It’s much better to be over-prepared and be thought overzealous than to under-prepare and lose out on something that’s important to you.

It’s always a good idea to think of an opportunity as something that’s right in front of you. Regardless of how much time you think you have to get ready for it, do what you can today!

Laying the groundwork and foundation for anything makes implementation much more seamless.

You’d be surprised at how much of a head start you give yourself by preparing. You’ll have plenty of time after you’ve earned the achievement to bask in your victory. Use the here and now to prepare.